Find exactly what you need.

Its quick and easy.

Air drying paint has been a challenge for both Waterborne and Solvent paints, that said you have several options. What are your options?
There are several factors that prohibit thorough drying on all vehicle surfaces;

It is possible to use heated air at low levels (10-15°F) in every step of the painting, whether primer, sealer, the basecoat, or clear coat. Heated air aids in creating an evaporation effect, as a result reducing humidity in the paint booth.  This causes the dispersion of remaining moisture from wet paint on the vehicle or parts surface. This speeds up the drying process. The primary goal in drying clearcoat is to increase the surface temperature of the vehicle to 140°F on all surfaces. With clearcoat, this creates the best drying environment for the most efficient results.

For waterborne, low humidity painting environment is ideal for drying in spray booths and will provide faster drying times. High humidity in the paint booth will result in slower evaporation of water from the paint, therefore, delivering slower dry times. To improve drying efficiency in a high humidity painting environment it is important to use a heating system in the paint booth. Every increase in temperature of about 10-15 degrees reduces relative humidity by approximately 10%. A paint shop with low humidity environments does not require a heater for the spray booth. High temperatures followed by improper cooling during the primer, sealer, and base coat phases could ruin the paint.

There are multiple booth types and each utilizes a different type of air movement to aid in the painting process. Popular booth types consist of

Downdraft booths are the most effective in the painting process. Air movement in downdraft booths enters the booth through filters in the ceiling and proceeds down into the pit of the booth. As a result overspray and debris are pulled into the pit due to the movement of air in the booth due to the air movement in the booth. As a result, there is less risk of contamination in the painting and drying processes.

The downdraft side exhaust is very similar to the downdraft booth other than the placement of the exhaust, the air still enters through the plenum of the booth. The exhaust is located at the back of the booth close to the floor rather than being located in the pit. The air movement enters the booth flowing down. As it gets closer to the ground it begins to be pulled towards the back of the booth. This style booth is known as a shoe painter booth because overspray often gets pulled close to the floor and then has to travel to the rear end of the booth and often ends up on the painter’s shoes, or on other parts of the vehicle.

Semi-downdraft booths utilize similar airflow to downdraft booths. Air enters through filters in the ceiling at the front of the booth, the exhaust is located in the back of the booth on the lower portion of the wall. This air movement is a diagonal airflow rather than horizontal or vertical. A negative association with semi-downdraft booths is the existence of a dead zone, an area with no air movement. When overspray is caught in the dead zone contamination may occur. The dead zone also makes it difficult to dry whatever is in this zone, whether it is the hood of a car or other parts placed within the zone.

Crossdraft booths create horizontal air movement flowing from the front of the booth to the back. The air movement is a laminar airflow, which is airflow in a single direction. This airflow pattern is notorious for creating a boundary layer. This disturbs the ability of vehicle surfaces and parts to dry after painting. Another downside to crossdraft booths is the possibility of contamination on the paint job. Oversprays’ only point of removal is through the exhaust in the back of the booth, therefore it increases the chances of contamination as overspray from the front of the booth will have to travel all the way to the back.

What is a boundary layer and what are the results?

Vapor entrapment occurs when the boundary layer causes the vapor to become trapped in the paint finish. The boundary layer prohibits vapors from evaporating from the paint leaving moisture on the surface of the vehicle. This can result in quality issues if not fully dried before the next application of paint. On the base coat, vapor entrapment weakens paint jobs causing the finish to bubble up requiring a redo on the paint job. When applying clearcoat and vapor entrapment occurs on waterborne paint, the clear coat will have a foggy haze. When solvents become trapped under clearcoat the result is cratering and pop. As a result, vapor will collect and will break through the clear coat to escape. 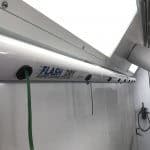 Knowing and understanding how spray booth air movement works is essential to getting the most out of the drying process. Airflow, velocity, and heat are all key factors in effectively drying cars and breaking the boundary layer. The inability to break the boundary layer or apply heat can and will cause inefficiency in the drying process. Turning the spray booth into a drying chamber will give the best results for drying paint and accomplishing that efficiently.